Normal
Ginger
Drama | Comedy | Lesbian | Australian
The Pivotonian Cinema
13 Mins mins
Greta attends a ballroom dancing class with her friend Betty. Greta has hopes of getting a cha cha or two with Lily, whilst other students have their own agendas.Directed By Michelle...
View
Trailer
Wishlist

Selling FastNormal
Polyester
The Pivotonian Cinema
86 Mins mins
John Waters' 1981 Cult Classic, Polyester. A suburban housewife's world falls apart when she finds that her pornographer husband is serially unfaithful to her, her daughter is pregnant, and her son...
$12.00 to $16.00
View
Trailer
Wishlist

For the Finale of the 2019 Geelong Pride Film Festival we are presenting Wild Nights with Emily, the dramatic comedy starring Molly Shannon as the poet Emily Dickinson. We are pairing this screening with new Australian short film Ginger directed by Melbourne filmmaker Michelle Douglas.

Waitlist Below: Join the waitlist to be notified if any tickets become available due to refunds or exchanges.

In Wild Nights with Emily Molly Shannon plays Emily Dickinson, directed by Madeleine Olnek (Codependent Lesbian Space Alien Seeks Same and The Foxy Merkins). The poet’s persona, popularised since her death, became that of a reclusive spinster — a delicate wallflower, too sensitive for this world. This film explores her vivacious, irreverent side that was covered up for years — most notably Emily’s lifelong romantic relationship with another woman (Susan Ziegler). After Emily died, the mistress of Emily’s brother (Amy Seimetz) along with editor T.W. Higginson (Brett Gelman) would publish Emily’s poems. A fierce rivalry between Emily’s beloved and her Brother’s mistress in making known the work of this great poet is also the story of two sets of passionate, illicit lovers struggling for a place in history.. 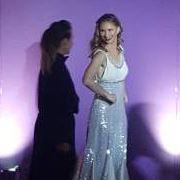