Normal
Dyketactics
The Pivotonian Cinema
4 Mins mins
DyketacticsWe are screening Dyketactics as a tribute to the pioneering American filmmaker Barbara Hammer who passed away on 15 March 2019 and who appears in our documentary Dykes, Camera, Action!...
$16.00
View
Trailer
Wishlist

Dykes, Camera, Action! explores the emergence of Lesbian filmmaking from the 70s to today. This screening is dedicated to the pioneering and influential filmmaker Barbara Hammer who passed away on 15 March 2019.  We have also received special permission to screen Dyketactics, Hammer's original 1974 experimental film piece that was groundbreaking for its depictions of lesbian sexuality. Dyketactics is credited as being the first lesbian film by an out lesbian filmmaker.

Lesbians didn’t always get to see themselves on screen. But between Stonewall, the feminist movement, and the experimental cinema of the 1970s, they built visibility, and representation in film. Filmmakers Barbara Hammer, Su Friedrich, Rose Troche (Go Fish, The L Word), Cheryl Dunye (Watermelon Woman), Yoruba Richen, Desiree Akhavan (The Miseducation of Cameron Post), Vicky Du, film critic B. Ruby Rich, Jenni Olson, and others share moving and often hilarious stories from their lives and discuss the expression of identity through film. 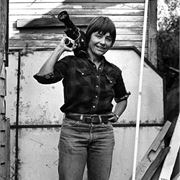