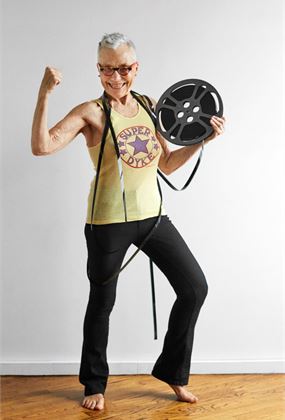 We are screening Dyketactics as a tribute to the pioneering American filmmaker Barbara Hammer who passed away on 15 March 2019 and who appears in our documentary Dykes, Camera, Action! Dyketactics is credited as being the first lesbian film by an out lesbian filmmaker.

"A popular lesbian 'commercial,' 110 images of sensual touching montages in A, B, C, D rolls of 'kinaesthetic' editing." — Barbara Hammer

"Hammer's films of the '70's are the first made by an openly lesbian American filmmaker to explore lesbian identity, desire and sexuality though avant-garde strategies. Merging the physicality of the female body with that of the film medium, Hammer’s films remain memorable for their pioneering articulation of a lesbian aesthetic.” - Jenni Sorkin, WACK! Art and The Feminist Revolution, 2007.