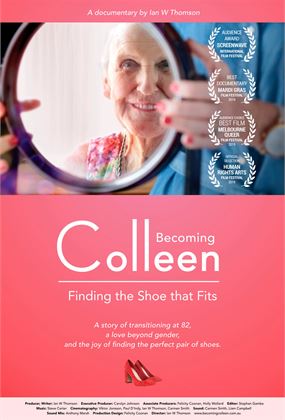 Selling FastNormal
Polyester
The Pivotonian Cinema
86 Mins mins
John Waters' 1981 Cult Classic, Polyester. A suburban housewife's world falls apart when she finds that her pornographer husband is serially unfaithful to her, her daughter is pregnant, and her son...
$0.00 to $16.00
View
Trailer
Wishlist

Sold OutNormal
Rainbow Shorts
The Pivotonian Cinema
120 Mins mins
SOLD OUT - This session is now sold out. Please Join the waitlist below to be notified in case of refunds and cancellations. If there is enough interest we could potentially schedule a repeat...
$0.00 to $16.00
View
Trailer
Wishlist

As a lead-in event to IDAHOBIT* we are presenting an encore screening of Thomas Banks' Quest for Love alongside another award winning short documentary, Becoming Colleen.

An intimate documentary about a young gay man with cerebral palsy who is on a quest to find true love. Geelong Pride Film Festival is proud to welcome Geelong local and much-loved community member Thomas Banks to the screening.

More than a documentary about the coming out of an elderly trans woman, this is a story of two people whose love transcended their traditional gender roles, a small community that comes together to support a friend in pursuit of her greatest dream, and about the joy of finding the perfect pair of shoes.

Platform YouthArts is Geelong’s is a cultural organisation dedicated to giving young people opportunities to develop their own works and practice, and to be part of an inclusive, diverse creative community.

Bike racks are located right out the front of COURTHOUSE YOUTH ARTS on Gheringhap Street and Little Malop Street.

Courthouse Youth Arts is fully wheelchair accessible, with two disabled parking spaces just outside the entrance on Gheringhap Street and a wheelchair accessible bathroom and lift.  The theatre is on the second level of the building. The lift is available from the entrance level to the foyer. Accessible toilets are available on all levels. Email geelongpridefilm@gmail.com to discuss Companion Card tickets.